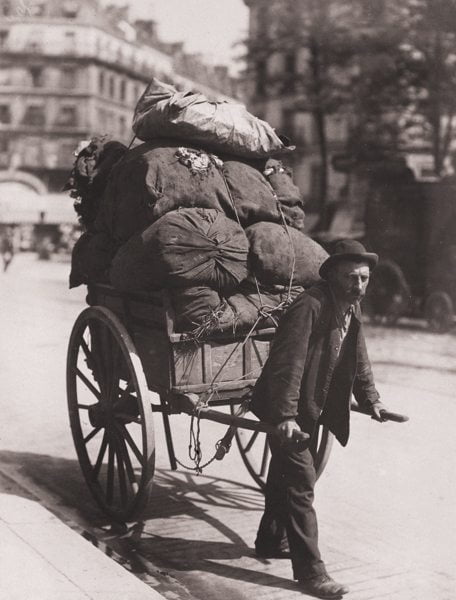 In a world where we are constantly being made aware of the scarcity of the finite resources we run our economies on, there exists something of a consensus around the benefit of recycling. If we have any hope of sustaining life on the planet it seems we must recycle.

But amidst all the hype, we appear to have forgotten some old wisdom: often reuse is far kinder to the environment than recycling. We look to the pioneers of reuse, the rag-and-bone men of the 19th century, for some inspiration.

In the 19th century, a number of men forged an unlikely industry from collecting and selling (essentially reusing) the unwanted household items of others. Some of the more common items they would find included rags which could be converted into fabric and animal bones which could be used to make fertiliser. Thus, they earned their name: the rag-and-bone men.

Patrolling specific districts once a week, rag-and-bone men were usually equipped with nothing more than the bag slung over their shoulder. The more “wealthy” among them may have used a cart, but their method would have been the same: sifting through the ashes or dirt thrown out of houses for items of potential worth.

Ultimately, they were pioneers in the reuse and recycling industry – purveyors and curators of valuable items amongst apparent rubbish.

The work of the rag and bone men lends truth to the popular saying “one man’s trash is another man’s treasure”. A particularly poignant example from recent years regards an object with a value that we can all be objective about: a 2,400 year old Persian treasure found by a rag-and-bone man and left to his grandson.

Fast forward to modern present day: nobody would like to admit that they’re capable of throwing out a precious artefact having mistaken it as mere trash. But in a way, this is happening all the time. For example, TVs are constructed from rare minerals extracted from the earth which grow ever more precious as they continue to be mined. However, two million TV sets are discarded every year with most ending up in landfill sites.

Do We Need the Modern Rag and Bone Man?

If every Briton purchased one item made from reused wool a year it would save 371 million gallons of water and 480 tonnes of chemical dyes (source: UK Gov). Considering this, you might think it’s time to take a cue from the original community recyclers who were experts in taking today’s goods to create the goods of tomorrow.

The business model that informed the industry of the rag and bone men can be encapsulated in this single point: if there is a potential use to anything, then there is potential worth too. This doesn’t only hold strong implications for recycling, as it doesn’t preclude the thought that some materials might be acceptable for reuse purposes too.

According to Waste Resource Action Programme (WRAP), around 83% of sofas are carelessly sent to the landfill or casually recycled rather than being reused. If we were to double the amount of sofas being reused, this could save over 52,000 tonnes of CO2. When you take facts like this into account, it would seem like the aforementioned method of operating on the premise that all items can be repurposed has long been forgotten.

Of course recycling is better than discarding, but reusing is even better. You can help to keep goods and materials out of the waste-stream, thus preserving the embodied energy that went into their construction as well as generating new business and employment opportunities. Growing awareness of the utility of reuse is giving rise to a new kind of rag-and-bone man.

For the original rag-and-bone men, the prospect of excavating through the abandoned former belongings of recent house movers must have been quite a regular one. After all, there were no removal companies to facilitate the kind of seamless transitions that are on offer now.

Everybody understands that even modern moving can be stressful, but consideration should always be given to the effect that you could have on the environment. This is especially true when you know that you will not be keeping all of your possessions. During a house or office clearance, the effort that goes into reusing and recycling as much as possible can seem like unnecessarily complicating matters. But it is 100% worth it.

We believe there is a huge weight on the shoulders of any company who perform clearances. With facts and figures pointing towards a severe lack of both recycling and reuse, the time for clearances informed by a conscience is well overdue. With massive, self started donation networks, we’re proud to know our reuse practices are helping to make a huge difference to communities as well as the environment.

While some waste transfer companies claim 50% – 70% recycling rates, others with a strong environmental ethic will actually allow you to see how they are integrated with the environmental agency. Ask to see their waste carrier certificates or ask if they can provide detailed audit trails of the items that you will leave with them.

This time round, the rag-and-bone man could be more important than turning rags into seat covers, or bones into glue: it could mean furniture for a school that desperately needs it.