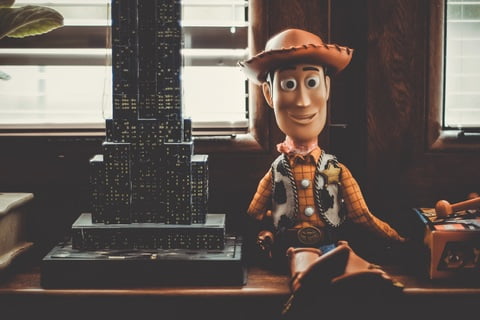 Pixar work wonders into their productions, often standing peerless in their ability to appeal not only to children, but to the child inside everyone.

Their first feature film with Walt Disney Pictures was Toy Story (1995). This movie began an unprecedented era of success for the production company, one that continues up to the present day.

The trilogy (soon to be quadrilogy) has films set either side of the turn of the millennium in the midst of Western civilisation’s consumer culture. As house clearance experts, we couldn’t help but connect with one theme: anxiety over waste, especially waste of reusable items.

Toy Story echoes a number of the core ideas behind environmentally responsible approaches to dealing with waste. After all, in each of the films the toys must deal with the frightening prospect of disposal.

For those unfamiliar with the first instalment, Toy Story’s plot is built around a 1950s toy cowboy called Woody and his fear of being replaced by the new Buzz Lightyear toy. But despite Buzz being the hottest new toy, kitted out with electronic features (rendering Woody outmoded), his owner, Andy, doesn’t play with Woody any less.

Waste lesson: You don’t need to replace what works.

In the film’s sequel we experience Woody’s panic of being cast out as a broken toy. However, Woody is discovered by a collector who recognises Woody’s value and repairs him.

Waste lesson: Try to repair what is broken.

In the third film Woody and his toy friends become unused and narrowly avoid destruction. By the end of the film, Andy has found a way to get more use out of his toys, though he doesn’t play with them any more, by donating them.

Waste lesson: Donate what you don’t need to someone who does.

The state of waste now

According to urban development specialist Dan Hoorweg and his colleagues, Chris Kennedy and Perinaz Bhada-Tata, global production of solid waste is set to double by 2025 in urban areas.

They suggest that without a move towards stable populations, more resource-efficient cities, less consumption and better use of technology, the rate of solid waste production may continue to increase at an alarming rate into the next century.

A 2012 report by Hoorweg and Bhada-Tata, ‘What a Waste: A Global Review of Solid Waste Management’ (2012) led them to predict that global waste production will exceed 11 million tonnes per day by 2100. However, an increase to this level is based on cities continuing to develop and discard waste at the current rate.

So what can we learn from Toy Story’s happy ending? How can we avoid the world ending up resembling a Wall-E type dystopia full of skyscraping rubbish heaps and uninhabitable land? By learning how to deal with unwanted items.

The resolution to Woody and co’s narrative is to escape a landfill wasted fate by finding solace in donation and reusability. At Clearance Solutions we deal with unwanted household items, such as toys and furniture, on a daily basis. Based in London, we began with a mission to decrease the rather shocking volume of reusable items that were being needlessly discarded by households.

We continue to prioritise the practice of reusability and its benefits, such as: saving energy used to manufacture new products, decreasing the demand for raw materials, reducing pollution and preventing items entering the waste stream in the first place.

Such a policy is not only eco-friendly, but it is also one that Woody and his toy pals would definitely endorse.