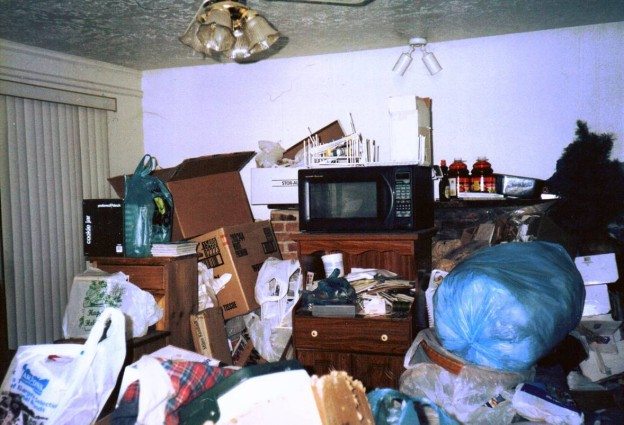 Walking into the home of a compulsive hoarder, the effects of the disorder are almost always immediately apparent. Yet there is still relatively little research and understanding about hoarding disorders, even though an estimated 1.2 million people in the UK suffer from the symptoms.

As a professional house clearance company, we encounter the effects of hoarding on a regular basis. So profound are the physical manifestations of the disorder, the mental and emotional strain placed on hoarders and those closest to them can slip out of focus.

Understanding the causes and risks of this condition will not only help find solutions and build a more effective support network, but it will also contribute towards enabling hoarding to become recognised as psychological disorder in its own right.

What’s the cause of hoarding disorder

Many of the psychological symptoms that accompany the urge to accumulate excessive quantities of stuff have made it difficult for hoarding to be identified a distinct disorder. Anxiety, depression and obsessive compulsion can blur the lines, making the condition hard to detect until the more acute stages.

Findings by the Anxiety and Depression Association of America (ADAA) suggest that the disorders most commonly associated with hoarding include several types of obsessive-compulsion, attention-deficit hyperactivity (ADHD), and depression.

As psychologists today understand it, there are three main categories within hoarding, each with their own set of potential root causes. Perhaps the most well known is emotional hoarding. This behaviour usually stems back to a traumatic event in an individual’s past, such as the death of loved one.

For others, the reason for hoarding (subconscious though it may be) is not to ‘fill an emotional hole’ but to protect others from what they perceive to be very real dangers. A frequently used example for prevention of harm hoarding is the fear that bin men may cut themselves on sharp items in the rubbish, so hoarders stop throwing these things away. The causes here can be much more difficult to determine, but may also be linked to extreme anxiety or trauma.

Conversely, deprivation hoarding has much more obvious catalysts, such as a time of great deprivation or uncertainty in an individual’s life.

The risks of hoarding disorder

There are a number of risks associated with compulsive hoarding. These vary from personal health issues and reduced quality of life, to legal problems involving the wider community.

The recent trend for hoarding reality tv programs may not have been helpful for developing a sophisticated public understanding of the psychological aspects of hoarding. However, they have given many people an insight into a condition they may not have otherwise been exposed to.

These shows highlight the key difference that hoarders are not compulsive buyers. Often the things they are hoarding are not newly bought but are instead items that most people would regard as trash. As a result, living conditions can quickly become unsanitary and leave residents at risk of developing serious health issues.

The sheer quantity of items, and disorganisation in the house exacerbate these health risks; cleaning is made almost impossible in these condition. Once the clutter is cleared, another important part of the services Clearance Solutions offer is a deep clean service for properties of compulsive hoarders.

Other more immediate dangers include the increased risk of falls and accidents due to such a compromised and disorderly living space. Fire exits and heating vents can become blocked, and some hoarding cases advance so far that they result in infrastructural damage.

This is often when the legal ramifications can start to emerge. Property owners can evict tenants with a hoarding disorder, and neighbours may also threaten legal action if their safety or quality of life is affected. For other residents in the property, such as children or vulnerable adults, they can be removed by social services.

Mistreatment and neglect of animals is also a criminal offence. While it is likely that an animal hoarder will not see their hoarding as mistreatment, the impact on hygiene and safety in the property is usually such that neither the animals nor the hoarder will be able to live safely.

Read more about our sustainable approach to dealing with difficult situations as a result of hoarding.